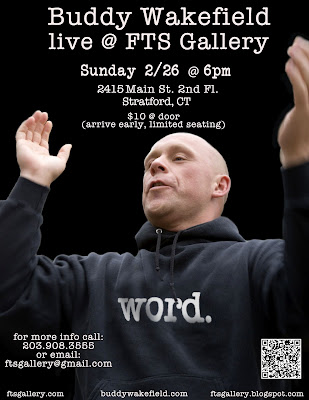 Sunday February 26th @ 6pm-- a special FTS Gallery matinee featuring the prose of Buddy Wakefield.  Admission will be $10 at the door.  Free refreshments!  Please arrive early in order to insure your seat for the show.  Reservations may be made ahead of time by coming to the gallery and purchasing your ticket ahead of time.  If you have any questions please call 203-908-3555 or email ftsgallery@gmail.com.


BUDDY WAKEFIELD is the two-time Individual World Poetry Slam Champion featured on NPR, the BBC, HBO’s Def Poetry Jam, and most recently signed to Ani DiFranco’s Righteous Babe Records. In 2004 he won the Individual World Poetry Slam Finals thanks to the support of anthropologist and producer Norman Lear then successfully defended that title at the International Poetry Festival in Rotterdam, against the national champions of seven European countries with works translated into Dutch. In 2005 he won the Individual World Poetry Slam Championship again and has gone on to share the stage with nearly every notable performance poet in the world in hundreds of venues internationally from The Great Lawn in Central Park and Scotland’s Oran Mor to San Quentin State Penitentiary, House of Blues New Orleans and First Avenue.

In the spring of 2001 Buddy left his position as the executive assistant at a biomedical firm in Gig Harbor, WA, sold or gave away everything he owned, moved to the small town of Honda Civic and set out to live for a living, touring North American poetry venues through 2003. He still tours full time and considers annual Revival tours with Derrick Brown and Anis Mojgani, as well as separate tours with Ani DiFranco, to be the highlight of his career thus far.

Born in Shreveport, LA, mostly raised in Baytown, TX, now claiming Seattle, WA as home, Buddy has been a busker in Amsterdam, a lumberjack in Norway, a street vendor in Spain, a team leader in Singapore, a re-delivery boy, a candy maker, a street sweeper, a bartender, a maid, a construction worker, a bull rider, a triathlete and a sucker for anything unfolding. And for peanut butter. And hygiene. Wakefield is a writer, the elated son of a guitar repair woman, wingman of Giant Saint Everything, and remembers Kirkwood, NY. Sanborn too.

Buddy, a Board of Directors member with Youth Speaks Seattle, is honored to be published internationally in dozens of books with work used to win multiple national collegiate debate and forensics competitions. An author of Write Bloody Publishing, Wakefield is known for delivering raw, rounded, high vibration performances of humor and heart.

The fellas in Ports of Spain and Milksop Unsung will be shredding the gallery and mopping up blood of the non-believers tomorrow with chicken biscuits.  In case yall are still in the dark here are some links to evidence of shred:

Posted by FTS Gallery at 4:16 PM No comments:

Age old beasts not so prone to fighting; the Gorilla and velociraptor battle on the flesh of humans at FTS Gallery.  Here is a little peek from the tandem of George and Rocky.  The victim of the tattoo extravaganza is Mr. Jeff Healy.  No animals (prehistoric included) were harmed during this process. 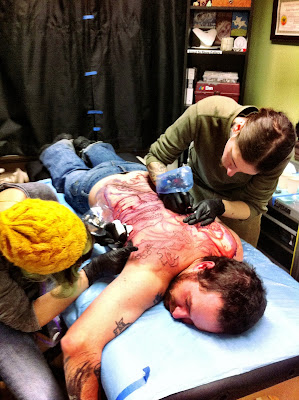 Posted by FTS Gallery at 8:46 PM No comments:

Lucid Dream only a few days away!!!

Yes, yes indeed--  Forest To Shore Gallery is ripe with activity hoping to turn on your creative churners and inspire something out of all the folks we love.  This Saturday we have the premier of Christopher and Lara Scalzi's art show "Lucid Dream"  Be sure to come to the opening reception to meet these talented siblings, take in the new show, and enjoy some killer cuisine and company.  The festivities begin at 5pm and will go until 11pm. 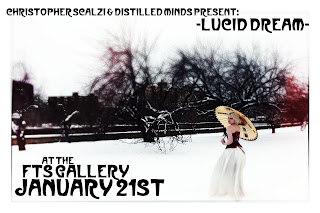 Posted by FTS Gallery at 5:32 PM No comments: 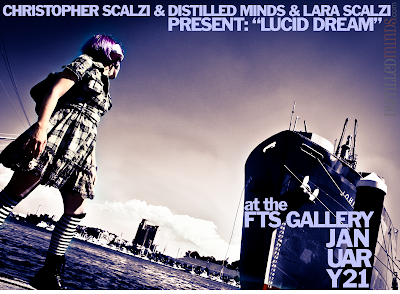 Christopher and Lara Scalzi bring their adaptations of life's monotony contrasted by our innermost desires to FTS Gallery.  The opening reception for this new exhibit will be held on January 21st from 5pm till 11pm.  As always FTS will provide refreshments at no charge.
Here is a little introduction into the lives and work of the Scalzi's:
Christopher and Lara burst out of the womb and into the art scene.
However, the art scene was entirely unaware of their presence at the time.
They grew up in a family obsessed with television and movies which eventually shaped their artistic styles gearing towards a narrative form of creativity. 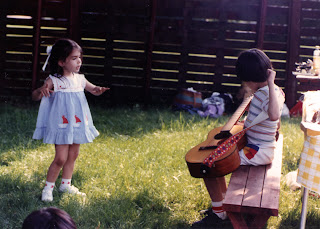 Tragedy struck when their musical career took a turn for the worse. After days of infighting and nearly a week of no show performances they decided to go their separate ways.
Lara spent the years tightly honing her crafting, sewing, collage and miniature dress making skills while Christopher discovered the Super Nintendo.
Lara went on to study English literature and creative writing at the University of Connecticut and Christopher studied film and photography at various institutions such as Film/Video Arts, NCC, and under various mentors in the field.
Both of them promptly did what every good American does in this day and age subsequent to their education: absolutely nothing.
Frustration and boredom levels were running high when eventually Christopher teamed up with Ian Kreisberg to create a photographic web comic called "The Dan & Steve Show" which ran for 3 years amassing over 300 comic strips.
In 2009 Christopher and Lara united creatively for their first gallery show Deleted Scenes, a collection of narrative photography including comics from “The Dan & Steve Show”, landscapes, and social commentary. It also included the first character profile shots for photographic graphic novel in the works titled “Kicking Monday”. Deleted Scenes was fallowed up by their second show Outtakes, an in at the pro depth look at the production process behind the creation of narrative photography.
This recent batch of work is based upon the contrast between the world of one’s dreams and the reality of their life. All produced in a pseudo comic narrative style mixed with fine art sensibilities, the images create a vision of each person’s secret inner subconscious depicting everything from terrifying nightmares to absurd scenarios.  Accompanying the dreams is a collection of surreal photography from high rises to vast deserts.
Posted by FTS Gallery at 5:53 PM No comments:

FTS Gallery
Stratford, CT, United States
FTS Gallery is an art gallery and tattoo studio priding itself on openness and creativity. Our goal is to inspire as well as to be inspired by a creative community. Don't be bashful, stop in to book an appointment with one of our artists, or swing by just to admire the work in the gallery.